The forum for all things rainwear

Stories and fantasies about rainwear.
Post Reply
2 posts • Page 1 of 1 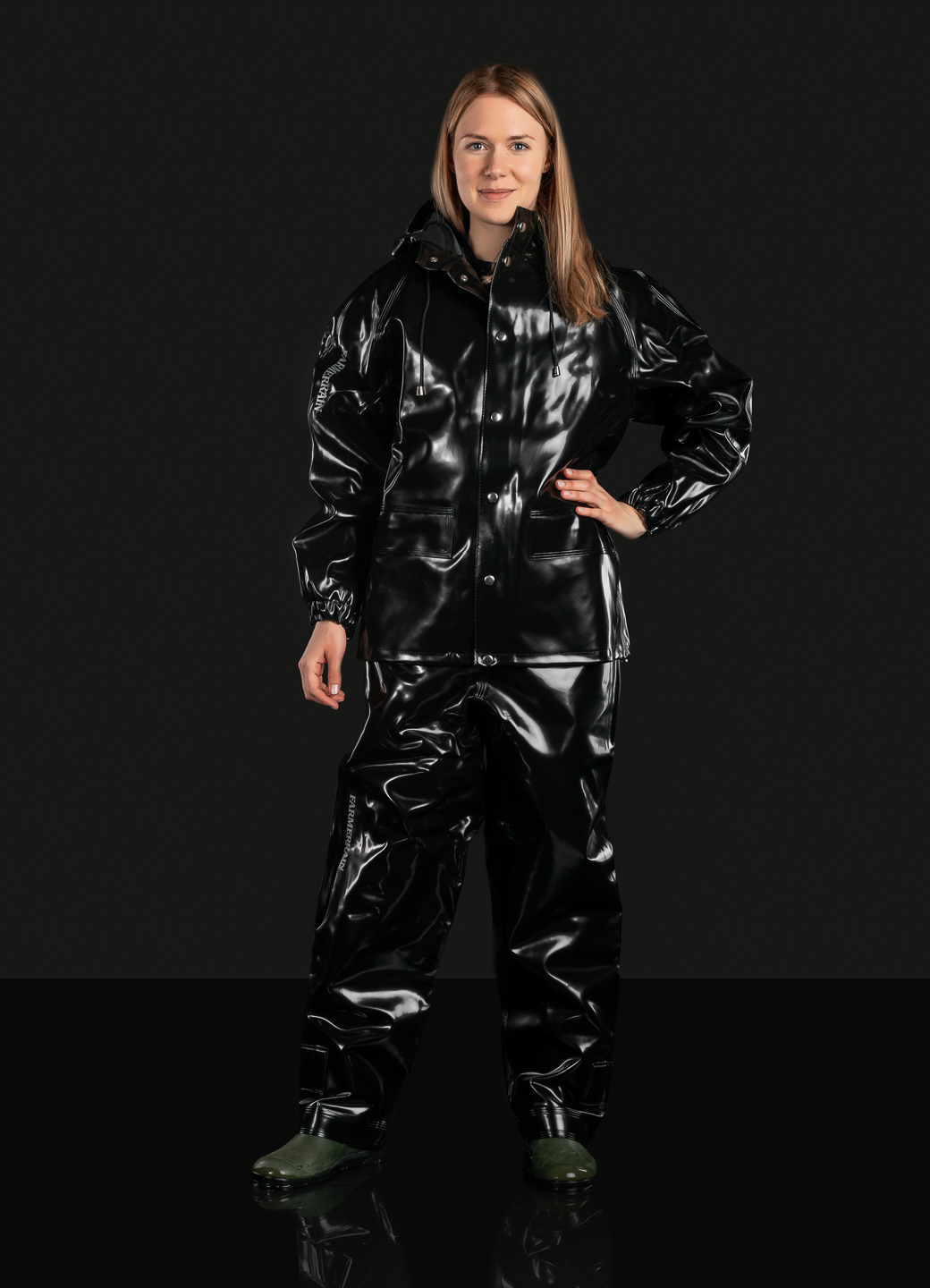 Amanda laid on the sofa slowly dozing off. From inside her mind she heard a noise coming from upstairs.
Noises that she recognized as the sound of lovemaking.
Heavy panting followed by groans and grunts of pleasure. At first she had thought that it was the next door that was where the noises were coming from.
But no it was definitely coming from upstairs.
Now her senses were heightened as she continued to listen.
The groans grew in intensity as some one was having an orgasm.

Then the sound from upstairs altered, from groans to the unmistakable pounding of a bed against the floor.
The rhythmic bang on the floor steady and resounding downstairs.
The floorboards above her creaking.
The muffled sound downstairs was quite intense now. As were the groans that followed.
This continued for about twenty minutes before the final and loud orgasm was heard.
Then silence.

Amanda had found herself aroused by what she had heard from upstairs.
Though she did not know why.
Now awake again Amanda went to the kitchen, firstly for a drink of water.
Then she had another idea. Getting some paper towels from a roll that was on a work surface she went back down the hall way and got her rain jacket and trousers off the coat hanger.
Sitting back on the sofa, she dried the jacket first with the paper. When she was satisfied it was dry she started on the trousers which was just as wet.
They had started to drip dry but still had to be dried as well.
Now dry she put both the jacket and trousers over the back of the sofa.

Quietly she started to take her clothes off. Making sure she was not going to be heard Amanda first took her shirt off. Unclipping the red lacy bra that was under it she took that off to.
Next off were her jeans.
Now just stood in her red lacy panties Amanda slid these off to. Now naked Her breasts free and aroused.
She shivered slightly.
Now she pulled her Black PVC trousers on over her. Balancing against the sofa she pulled them over her naked sexual part.
Next was her jacket.
Pulling it on over her shoulders it was cold to the touch.
Covering her aroused nipples Amanda zipped it up.
Her nipples poked through the PVC of the jacket being moulded by the PVC as it warmed up.

Just standing in her rain suit Amanda waited for a couple of minutes to see if there was any more noise coming from upstairs. Satisfied that all was quiet. She slowly slipped up the staircase. On tiptoe she reached the door to Susan and Julie's bedroom.
The door was slightly ajar when she got to it. Slowly she opened it hoping the door did not squeak when it was opened.
All seemed quiet as she crept into the bedroom. Her nose quickly picked up the smell of sexual activity.
Amanda reached the bed and gently pulled back the quilt that were covering Julie and Susan.
There was just enough room for her to lay on the edge of the bed.

Julie was laid on her side facing away from her as she positioned herself behind her.
Amanda slowly put an arm round Julie over her naked breast trying not to wake her up. Julie just murmured in her sleep, nothing that Amanda could understand.
Amanda's rain suit seemed to stick it's self to Julie as they were laid together.
The heat from their bodies making Amanda aroused as she could feel her own breasts becoming erect again.
She just laid there very quietly and not moving just enjoying being close to Julie.

Susan knew it was a fantasy of Julie's to be taken by two people and tonight it was going to happen.

Panting Julie was getting exhausted from their constant lovemaking.
It seemed that they had been making love to her forever but in reality it was only about 20 minutes. Her Anus stretched by Susan pounding her from behind.
“Shit shit shit”
“Oh yes!!”
And again she orgasmed.
And as she did Susan pulled the cock from her arse.
Letting Julie relax now.
And finally climbing off Amanda and lying down beside her. The wetness in Amanda's lap very obvious.
Now relaxing from her sex session Julie laid still for a while
Susan and Amanda laid next to her with Julie in the middle of them.
Resting Julie could feel the two dildos pressing into her one from in front
of her the other from behind.
The three of them made love to each other several times during the night in various positions. Finally exhausted they fell asleep at around four oclock in the morning.
Top

Re: The late night